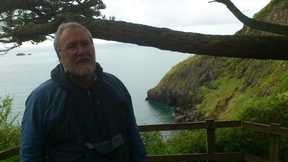 Fred grew up in a wild part of the West Riding in the Fifties and Sixties and had an idyllic childhood and rather less happy teen years due to family illnesses and deaths. He went rather abortively to Sussex University, though learning more than a little from the American Poetry section and discovering Basil Bunting. He ended up writing full time for several years in the early Seventies in North Yorkshire near Whitby, which was almost like a modern Creative Writing MA, but rather lonelier. His translation of Robert Desnos’  Night of Loveless Nights dates from those years as do numerous poems from the borders of Surrealism. He spent the next thirty years in Bath, working as a bookseller, van driver, gardener etc. as well as being very hands-on parent. In the Eighties and Nineties he edited The Poets Voice, from 1992 in conjunction with Wolfgang Goertschacher and James Hogg of the University of Salzburg Press. He ran Mammon Press during the same period, publishing a number of books and pamphlets by writers including Jenny Johnson, Nicholas Johnson, Sally Purcell, Jon Silkin, Charles Hobday, Fiona Pitt Kethley etc. He was also first Chairman of the very large scale Avon Poetry Festival during the middle 1980’s. He went back to University at Bristol in 2000 and took a Classics degree. In 2003 he moved to Torquay and has written a good deal of poetry, often influenced by the light and colours of the sea and moors, translated a medieval Islamic epic The Story of Joseph with Ravil Bukharev (Global Oriental 2011); and been an active  member of the  Poets Torbay Group. He has also been venturing into Scotland for the Callander Poetry Festival for over a decade. He is currently working on a version of Virgil’s Georgics besides numerous poems of his own.

Fred’s earliest published poem dates from the Winter of 1966/7 when he was struck by some winter trees as he finished his piano practice.  A pictorial element has continued  in Fred’s work, but there is also a fascination with  the music of the inner mind, which has  a relationship to Shelley, who he has published a study of, but also  W.C. Williams and H.D and perhaps Eliot. He published a number of pamphlets in the 70’s and 80’s (notably The Fisher Queen, Northern House 1988), which were collected in The Whiteness of Her Becoming (Salzburg UP 1992). Since then he has published five books of Poetry, most recently New and Selected Poems (Shearsman 2005) and The Old Outlaw( Shoestring 2011). Two of his translations are in the  W.W.Norton anthology World Poetry. His modern French versions from Char, Desnos etc are collected in The Bees of the Horizon (Etruscan 2005).

Fred has read in Scotland at the Callander Festival, at Torriano in London, at Nicholas Johnson’s Six Towns Festival, at the Anderson Festival and Torquay Poetry Festival and quite a few other venues. He is always glad of an opportunity to read…
​

There is a shifting of sand under the feet,
And birds with delicate steps
Make patterns like stars, walking calmly
At no great distance. Great rocks
Perch one on another, islands of
Mutual support, that did not run
With the water, or disintegrate beneath its power,
But stayed, at least for a while,
And in their defiance are uncouth.
And on one of the black islets further out
A black cormorant, another grotesque
In this natural sculpture. And the horizon
Has a marking of black, and leading away from it
And its strange legend of clouds
The grey waves do not blink.


METHUSELAH AND THE PARSON

beard entangled with seawrack,
and crusted with shell fish, denying

The Deeds of Men in a sonorous Sumerian,
much to the consternation of the new Parson,

who, not being sure whether it was
Latin, Greek, or Russian

alerted the local social work team
to the possibility of subversion.

'But', they assured him,
'It's only Methuselah.

A bit tatty, but he's
been here since the Flood.

And, if you'd been here since the Flood,
we doubt if you'd look as good.

And the embarrassment of an enquiry
is something we would rather avoid.'

denying the deeds of the Human
in a most beautiful Sumerian.

Prometheus – Trickster,
Firebringer
where in the roar
of this gale
is your voice?

You are gone
from the crag-face,
and the great dark bird
has ceased to gnaw
your liver. Yet we are
as fearful
of our death as ever!
Greed and Genocide,
those dark furies
still loiter.
And the fire you smuggled
out of Heaven
for our renewal may soon
turn the planet
to cold ash.


Come back, Prometheus!
Blow into the Heaven
you slipped out of.
Though Zeus undoubtedly
is in control up there,
use your guile,
get past the guards
and bring us some contraband;
but it had better be something
totally unheard of,
beyond the dangerous dreams
of our expectations .