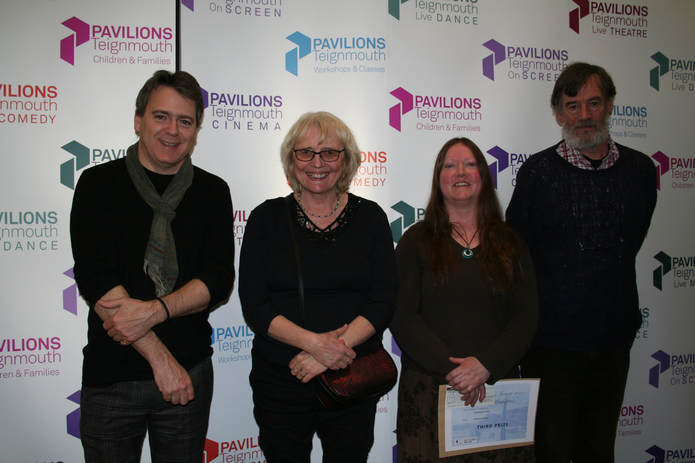 Photo - Ian Chamberlain
Marc Woodward, Liz Diamond (Judge), Catherine Locke and Don Pearson
Judge’s comments:
Judging ‘Teignmouth Poetry Festival’s Local Competition’ wasn’t an easy task, although my short-listed poems made their presence felt easily on the first reading.  I was looking for clarity of form and meaning, an emotional resonance, an instinct on behalf of the poet that what remained unsaid was as important as what was said.  My final three prizewinning choices echo all three of these criteria.

Warm in my father's palms, the woodcock lay
soft, its short neck lolling, head tilted down,
long beak scribing out a grave on the ground.

The cryptic bars and patchwork of freckles:
perfection, save for where the shot had ripped
aside the fine curtain of its plumage.

Pluck downwards so as not to tear the skin
(not up against the grain like tougher fowl)
then draw, clean and truss the little game-bird.

From the top edge of the wing you can pull
the pretty pin feather for a hat band -
though artists like them for detail painting.

across the Winter sunset and perhaps
its haphazard zig-zagging flight would say
It's not over, I'm still here, it's okay.

Raven is trickster,
multi-talented, multi-taloned,
player of many parts:
companion of gods
and a fallen angel,
reader of last rites
and executioner,
death himself and sexton.

He is stunt pilot,
soaring, wheeling,
a blackfire Icarus
spinning down,
tumbling, tumbling . . .
until the last moment when …
he rises again
like a twopenny god or a king,
then lands
and screams his sovereignty
to the rocks and to the world
as if doubt were a weakness.

Raven struts, flies once again,
waves himself against the sky,
a black rag, a patch of absence,
an unwilling, unwelcome messenger,
an unkindness or a portal to
the heart of dark matter
in whose nothingness
humans see their own failure,
their own fears.

We are sleepwalking towards winter,
winding down now.

I hear the silence creeping
around the house as days
shorten to shadows.

There is less said….

Spare words are hung outside
to chime only
when the wind blows.

I feel a settling of
my thoughts and of
this house as all the clocks
tick-tick
through vacant air.