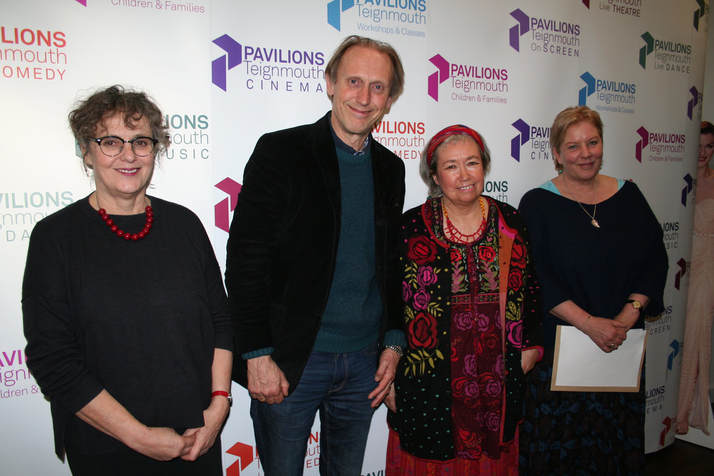 Photo - Ian Chamberlain
Joanna Lowry, Graeme Ryan, Pascale Petit (Judge) and Sue Proffitt.
Judge’s comments:
What a meticulously organised competition, and fascinating to read all the entries, some very local and some from far afield. The sea was a frequent presence. I love reading poems unaccompanied by their authors, just encountering the art. Trawling through them was like a treasure hunt, many adventures with words had along the way, through various and enthralling worlds. Thank you to all who entered and entrusted your poems into my hands. I am impressed and thrilled with the ten that were shortlisted.

I pray to the sun on these temple walls,
the shifting angles and blaze of it,
the way it melts the pavement ice
mid-morning near the cashpoint –
I imagine them as merchants, astronomers and viziers
sitting at the window of the coffee-shop opposite
then they become slaves and slave-owners,
baboons manoeuvring the flow and current
of glinting windscreens,
tax-collectors with the snapping heads of crocodiles
that cancel me with an eye-blink;
asps and hawks and chattering ibis.

I am sore beggar and heretic
but Horus shares the sun’s strength with everyone
and for moments He lets me stop time
freezing the figures in KFC and BetFred the Bet-King,
jamming the screens inside Lloyds Bank
so that Ra makes a gong-bath out of the street-roar.
The Gas-workers toil in their jack-hammer clatter
on the banks of the traffic-river.
One squeezes the life out of a cigarette,
the vapour of his breath in a shaft of sun
like the frost of my breath in the aching air,
this midday moon I take for divination and augury.

The sun’s transit takes the blaze
behind high roofs; there is a trapezium of light
I shuttle to at the corner, it forecloses.

Someone has bought me a coffee, her glance has a smile.
I open the lid and take a careful sip. A packet of crisps too.
The moneylenders have not quite taken over the temple.

Anubis looks out through the eyes of a jackal-headed dog
that walks up to me, just out of reach. It sniffs.
Weigher of souls, tomb-guardian, am I fit for Paradise?

When I opened my mother’s eyes
I expected glazed windows.
Deep fog through windscreen glass.

It was a troubling thing to do.

in those hours just after -

its mad monologue down the corridor

but in this room, nothing
but the dead-bird body
of my mother

I think I did it to make sure

No. I knew
But the one unbroken line was between our eyes -
when everything else had snapped

Was it still there?

With one finger, gently,
I pulled each eyelid up.
There they were -

Were they empty?
No.  They held the look of someone
Leaning back into the body of a mountain

The photograph shows a young Chinese
Woman, perhaps a hundred years ago.
I know because the print is small and silvery
And it has the quality of fine sand, and because
She is dressed in beautiful brocade robes
And because her feet are bound.

Her face holds my gaze like a vice,
So perfect, like an oval moon, with only
The faint calligraphy of fine eyebrows
And the traced contour down the bridge of the nose
To her small mouth, and her glass eyes that look
Fiercely down the years into mine.

It might be porcelain, her skin, and she herself
A vase, and the tapestry folds of her dress
Might be a cloth draped around a piece
Of furniture, for beneath them her
Embroidered feet peep out: small carved castors
That she might be rolled around on,
Or tiny hard buds: tightly folded flowers.