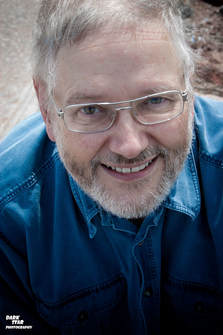 Simon Williams started writing poetry in his teens, but only started to take it seriously when at university, under the mentorship of first Roger McGough and then Pete Morgan, both of whom were strong influences. His interest in writing lead him to a songwriting course at the Arvon Foundation’s centre at Totleigh Barton, where he met Susan Taylor.

They started corresponding and after Simon had moved jobs to Derby – he trained and was working as an engineer – they met again and married a year or so later. They were both living in Lincoln by this time and started to run poetry and music events in a local pub, something they have continued to this day, wherever they’ve lived. Over the years, guest poets included Adrian Henri, Ivor Cutler and Matt Harvey.

In 1981, Simon and Susan moved down to Devon, to take over the Totleigh Barton centre, which they ran for three and a half years. Since then, they have founded a workshopping group and have run poetry courses around the country.

Simon’s first book was published in 1981 and he has had seven more since then. He latest solo pamphlet, Spotting Capybaras in the Work of Marc Chagall (www.indigodreams.co.uk/simon-williams/4592093628), and his latest full collection, Inti  (www.overstepsbooks.com/poets/simon-williams) were both published in 2016 and he has a new co-authored pamphlet with Susan Taylor, The Weather House (www.indigodreams.co.uk/williams-taylor/4594076848), published this year by Indigo Dreams. Simon was elected The Bard of Exeter in 2013 and founded the large-format magazine, The Broadsheet.
​
A Useful Suggestion

Why did you change your name;
was it to fit in better?

Marc is easier to cope with, in French,
in English. Moishe would have been
trouble in Russia, when I went back.

Are you happy with your names
and why do you need three?

I don’t, though I guess there was scope
to change, if I didn’t like the first.
At least yours is unique. I don’t know
anyone who could be Marc Chagall but you.

I see, you want to call attention.
Should you not do that with the poems?
You could put a crocodile in the last line.

Sneaking An Angel Into A Poem

It was when they drained Venn reservoir
and we could see the undulating gravel at its base.
We walked the tourist track, grown clammy
through the wet weather.

At the small bridge, where a stream runs down
helplessly to trickle charge the lake before the dam,
we looked North East, when Susan said,
“Oh My God, an angel.”

Sure enough, in the shallows of the water,
not attempting to walk it, as another might,
an angel, its grey glow shimmering this late December,
visited.

We couldn’t tell its gender, Uriel or one from Zachariah.
Kit once said he’d always thought they went
straight down like teddy bears, though obviously
without the golden fur.

We stood like shepherds, virgins, ufologists,
neither of us thought to take a mobile to it.
It didn’t seem to want to impart secret knowledge,
just fixed a stare towards the bank.

I hear you getting restive, the first vibrations
of complaint, with reference to the title.
It distinctly says ‘Sneaking An Angel
Into A Poem’.

Yet this apparition has hardly snuck;
its long, thin legs are placed there, bold as brass.
Its wings, when it should care to use them,
move the real air.

Which only shows the unreliability of poets,
making more of everyday events than they have cause to.
With fresh examination of the facts, as pertinent,
I now believe it was a heron.

Enid brought her to us
when Tom was barely born,
found her down by the Torridge
in a sack, old sack.

A familiar cat, from a piebald mother
and an old tom strong
from the scraps of the village
and black, jet black.

They say that cats love places;
warm rooves, hot stoves.
You must rub their feet in butter,
to distract them when you move,

but this one took to people –
never wandered more than metres.
She was happy with her household,
had nothing else to prove.

Tom has gone to college
and still the cat has work to do,
soaking up the sun
on the cobbles in July.

Tonight, beneath a feline moon,
I slide the earth by shovelful.
The metal spade-shaft rings
like an old church bell

and the pile of soil I’ve dug,
fits exactly in the hole,
like the old cat had no volume
after one remembered spell.

It will be cloudy,
mainly underfoot.