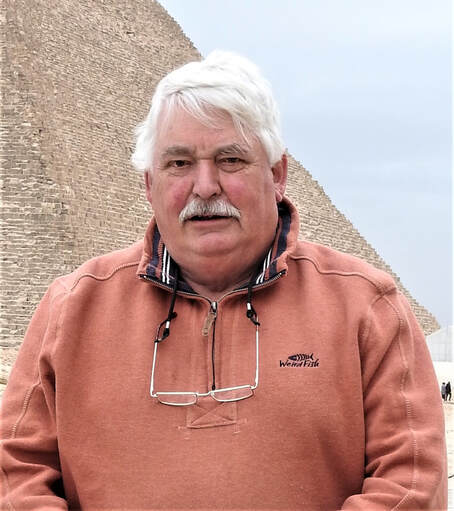 Graham John Burchell: 1950 - 2021
May 21st 2021 will remain etched in the memories of many of us at Poetry Teignmouth – the day Graham left us.  Even now it seems impossible he’s gone.  What remains are memories, all of them affectionate.  Luckily, there are tangible leavings too, like photos and video clips: Poetry Teignmouth’s own video of the memorial event held in September can be found via this link:
https://youtu.be/G9fQLPhguVo
The film is far from perfect but we hope it gives a flavour of our esteem for the man and his poetry.  It also includes a few of the poems written in memoriam: Pat Fleming, a founder of Moor Poets, is collecting these tributes and will publish a small anthology in the not too distant future.

​As a further legacy we have renamed our annual competition for Devon writers: they now compete for the Graham Burchell Prize for Devon Poets.

Graham left us his personal stock of unsold books.  These can be purchased mail order (see the ‘Contact’ page) or from the sales table at some Poetry Teignmouth events.  All money raised will go to The Graham Burchell Foundation, a charity designed by the man himself.  It’s purpose, he decreed, would be to assist poets of advanced years in seeing their work published.

A few copies remain of Graham’s two story books for children, both published privately about 20 years ago:
Wumpleberries and Gronglenuts     £5.00 inc P&P
Chester and the Green Pig    £5.00 inc P&P

Because he led me up the garden path,
up above Cornwood to a hedged terminus with sentinels
of nettle, I feared that the me he saw would be teased
from the body he knows I fail to service, to run enough,
like a car left to rust in the quiet of its garage.

We managed a stile, a horse field, plodded a lane, followed
a track to a creaky gate and climbed beyond farm buildings
(tired too it seemed of being up), up past a free-
flowering buddleia kissed by a silver-washed fritillary
and its nymphalid cousins, up until it looked hopeless.

We'd expected a wood or open moor, so we retraced
to a car still cooling its engine, took the road to the left,
crossed a bridge and swayed between maze-high hedges.
There was too much up to talk, just heat, heart thump,
campion, and grass growing through tarmac.

We turned north to a path that became dry scatter
leading us up until we did come to open moor;
a rising treeless field of flowering gorse, bombed
with granite boulders in some Olympian war.
I found one to sit on, had coffee and chocolate.

We could have driven up, I said. He nodded,
pulled his rucksack on to his shoulders, asked if I was up for it.
Everything the underside of his boots touched, inclined,
yet still I followed, up over Rook Tor; not really a tor at all,
and he pulled ahead, got smaller.

The me inside my struggling body (just there to feel its pain),
set challenges. Just get as far as that flat rock.
I was going to make it. He was already there,
hand on hip, king of the castle, looking down on me,
knowing I wasn't physical.

Forty years before, he had to show me how to kick a football
to keep it low, to get it to go, under a goalpost.
Yes, he tried hard not to pose,
while for me, the last steps to Penn's Beacon's great cairn
burned in my blood and joints.

I touched the placed stones, felt how cool they were,
stepped into them, reached for the highest,
released my frown, smiled at the sky, smiled at him,
knowing the only way from there
was down.


We Need a Name
(Heard melodies are sweet,
those unheard are sweeter –
'Ode to a Grecian Urn' – John Keats)

for music found in the stillness
of a wood skirted by wind.

The sun finds a way in with breves
and dotted-crotchets: preposterous
rhythm softened and absorbed.

Even basal stones are mossed,
muted like drums wrapped in velvet,

and clefs, notes, dynamics are danced
from staves and poised soundless
like Beethoven on the page.

where a metronome falls in
with the beat of your heart.

Here's a shift to a place where music
like a smart child, is seen but not heard.

From 'Light Music', a charcoal drawing by Geoff Nickolls
and from a collaborative trip to Wistman's Wood.
Poets, Painters and Printmakers, 2012.

We call it bush but it's trees.
We are a club following a path between,
looking for life.
Leaves drip.
There are puddles from a recent storm.
Not for the first time
Henry is told not to touch, to leave it alone!
He doesn't hear or doesn't want to.
With thumb and finger
he has it off the ground, not sure,
eight inches of chongololo, black as night-oil
on a brush of legs.
Others shriek at his bravado.
He offers his catch to Clara – thrusts it
an inch from her face
so she may sense her distance from it.
Her squeal is the kind that could shred leaves,
have lizards flatten on trees,
and turn frogs to stone.
Henry is yelled at; told to put it down.
He disobeys, drapes it across his palms.
He cannot see its eyes, its fear.
He still has to grasp why it coils into a fat badge
or craps in his hand.

on a bed where so many have lain before,
my eyes considering a flat ceiling
for the first time in a brace of displaced days.

I shut them. It's ten in the morning here.
I try to sleep, roll to the left, think about gravity,
how it sticks me to the mattress in this student cell,
abused for generations in a college that sits
so gently in its green.

I ponder all the homesickness festered here,
all the essays contrived, the alcohol, vomit,
tears spilled, love made on this single bed...

...my eyes jolt open. I'd become foetal, slept,
woke to two tiny cockroaches exploring
the far border of my pillow.

At the edge of my dream I'd heard a bird let go
its exotic riff, its assemblage of hoots and gulps.
It repeats them, repeats, pulls me up, floats me
to the window because, I'm in Sydney
and I need to know.

Breakfast Under a Yellow-bellied Sun 2019

me
snipped slapped weighed and wrapped

me
how long have you got

now look at us

Breakfast Under a Yellow-bellied Sun 2019

could be waking early

I know they ashed my flesh, milled my bones,
sealed the flour of my body in a casket,
and buried it out of sight on the north side
of the churchyard, to be half sunk flotsam,
caught in a wave of tombstone buoys whose tip
and sway through the calm between tempests,
cannot be measured by those who disposed me
to memory.

I know it was October. I was ashed but still here.
On a moonlit night I crawled out
feeling damp turf against toes, knees and palms
that I no longer owned. I sensed without discomfort,
a chill washing over skin no longer worn.
Tongueless, I tasted the air, the turn of leaves
about to drop.

I know I was not alone. Others came out of the earth,
looked skyward. There was light, birdsong, voices.
One brushed dirt from clothes with fingers
long since whispered to dust.
Here stood the assured and the confused, leaning
on lichen-crusted markers of their mortal lives.

I know one had his old moon face buried into folded arms.
Others, dressed in the way of their day, greeted
like old pals across the gap; a spark
between their eternal bed and the next.
Many, like me were naked.
Perhaps we were the burned ones;
alternative members of the same occasional club.

I know a young man in a white collarless shirt,
reached out a hand that was once his own.
His other pointed to stone-carved words;
Charlie, who fell asleep in nineteen nineteen,
in his seventeenth year. He blinked, not at my nakedness.
We didn’t care. And I know in a far away voice
he said, I believe this is your first?