Both collections stretch borders, look at the world from unexpected angles. How to be Naked focuses more on the personal with themes of time, memory and relationship. Colouring Outside the Lines engages more with the wider world, a political and environmental perspective interwoven with the personal and the surreal.
​
My latest collection, Signals From the Other, published by Dempsey and Windle,  explores our relationship with the other-than-human; animals, as individuals and species, plants and the whole planetary ecosystem, as well as our perception of the ‘something beyond’ that we call spiritual. The imminent climate and environmental catastrophe is present, explicitly or as a silent backdrop, in all these poems.
​
Much of my work has involved collaboration with visual artists and musicians, and in 2022/3 I have a series of events planned with jazz and improvising musicians, including working as part of the Day Evans Dale Ensemble, live and on a recording for the Discus record label, as well as performances with my own poetry/music band, Crow Country. The Smallest Monkey in the World, one of the poems from Signals From the Other, can be heard, performed by Crow Country, on  https://youtu.be/S9q00iaQdu4

I have been a member of Moor Poets since its inception and feature in its four anthologies
Alongside being part of Poetry Teignmouth's steering group, I am a workshop leader and Poetry School tutor, and a sought-after live performer. 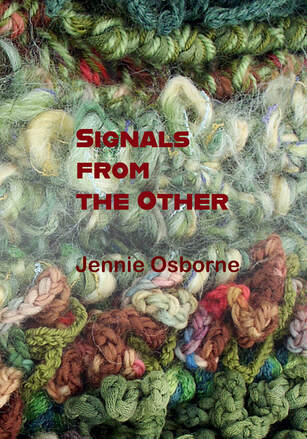 SIGNALS FROM THE OTHER

It’s a game that’s gone on for millennia
between those with an ear fit to listen
and that with a multitude of names
which speaks with more than tongues
has blown its whistle more loudly each decade.

Some find they need to put their heads
to the ground to catch the litany of mole rats
or the rattle of gods. Some swear
by dreams but their dictionaries disagree –
a case of pick and mix at the new age bazaar.

Some follow the tracks of tiger or vole
as they peter off towards extinction,
or interpret the bees’ last messages,
the kakapo’s failing language, witness
the redwood’s blazing groans.

These days, it’s more a matter
of shedding earmuffs, ripping off blinkers,
turning down the eat me, buy me white noise
and peeling off the plastic gloves, putting
an ear or a fingertip to any throbbing pulse.

And what we choose to be deaf to
has given up on subtle, given up on
the liquid language in lost eyes, diminishing
chords spring after spring, starved soil’s
crunch as it turns to sand.

Seas have tried tantrum, rivers given lessons
in weeping. Every day the assemblage of ghosts
thickens, their silent accusation nudging through the ether,
tapping out its Mayday in minds which have cracked
the carapace, dare to be naked to our own complicity.

It’s time for stormy crescendo, turning up
the heat, for waves of howl so strong
they lift us, hurl us, shatter us, drown us,
leave us to lie among oil-smothered fish, poisoned
cetaceans on a plastic-studded beach

and soon there will be unmaking, the first
threads are pulled. We can’t say
there was no signal.