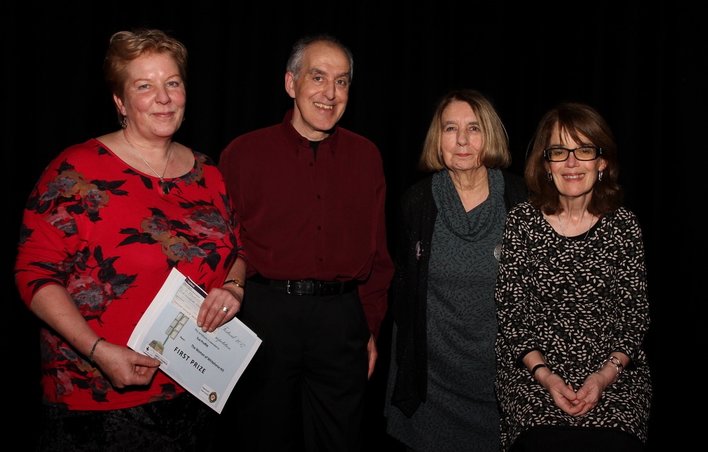 The stones have been singing to me for as long as I can remember
their cracks and edges rubbing against each other slowly.

I sensed the peat stretching itself around us
bringing that black that is all root – matted bones
choked throats – still the stones sang, indifferent.

I did not mind the deeper dark,
felt the soft shift of my dust on your pelt, my beloved.

I came with beads, the ash bride.
Amber like your eyes - the resinous heat of your eyes –
two of them on my wrist, and shale, glint-cold like the rivers.

This was my gift. You would see me
on the other side of the fire
dressed for the journey.

The dark took us further than I could have dreamed.

Then change came.  Cold.
Rain coming in slantways and something else, sharp, so sweet -
heather, honey of gorse, vinegar of moor grass  -
and the singing stopped.

Now I hear buzzards keening above.
You hear it too, I know. I feel you stir.

Something has disturbed our final coupling.
I was warm, the fire’s heat still inside me –
now blown open -

Something is happening to us.
I am leaving the stones behind

we are lifted up - a soft dust, a scrape of fur.

The sky falls through us

'Something there is that doesn't love a wall.'
In our street, it's valerian, self-sown
in every crevice, defiant of brickwork,
sending its roots beneath the worn old stocks
that delineate front gardens, then heaving,
like the shoulders of a restless sleeper
shrugging off the duvet; or burrowing
beneath the ramparts, like engineers of old.

But Frost wanted to know, before mending,
what he was 'walling out or walling in',
if marauding livestock was not in question,
and wondered how others viewed his barricades.
I remember the open plan gardens
of a sixties estate, design intentions
slowly subverted by slyly-planted
shrub or hedge – Goodness, has it grown that fast?

Roaming sheep or vandal hordes, pissing dogs
or new ideas –  it is the work of lifetimes
to keep them out, enfold our precious secrets,
build up defences, mend the wall, stand sentry
over self; while spores float helium-light upon
the breeze, all negligent of boundaries,
intent solely on dissemination,
on tearing down barriers, on getting in.

Before you became
the third man
in a week to ask me,

we’d carried Pentecost Sunday
down a long Dorset lane
and into Hillfield,

where we’d rested in the cool
of a late summer’s afternoon
in the woods, under the gaze
of a crucified Christ in Glory;

and you’d remembered vividly—that summer
—spending hours on the stumps of trees,
praying to be whole, to be well again;
and as you told me, I’d prayed with you.

And as a seam began to unravel
and I glanced bare, naked flesh,
I did not wish to stitch it up,
to repair where the light shone
on your thin pale thigh,

for I was glad of it.
I wanted to thrust my hand in,
to feel your wound,
to verify the truth of the moment.

And as we began to follow
baby ducks back up the village stream
we’d both been glad of it:
that sacred, confessional moment.

But, afterwards--
admitting you'd felt you owed me --
you said I must have known you were drunk

on the relief of unbuttoning a burden.
For afterwards you were sorry for it
and you wished it had been different.