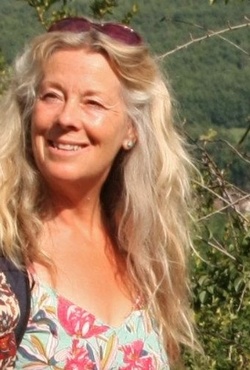 Poet, author and workshop facilitator Roselle Angwin leads the ‘Fire in the Head’ creative and reflective writing programme. As an eco-poet and eco-psychologist, she also leads ‘The Wild Ways’ outdoor workshops and retreats; both programmes take place on Dartmoor, in Cornwall, on the Isle of Iona and France.

She's passionate about wild places and the natural world, as well as the meeting points between inner and outer geographies: relationship, connection, land. She has been described as 'a poet of the bright moment... whose own sources of creative inspiration are her native Westcountry, the Scottish islands, and a highly individual blend of Celtic myth and metaphysics, archetypal psychology, shamanic and Buddhist thinking'. Her ten books include poetry, novels and non-fiction.

She blogs on her various passions at roselle-angwin.blogspot.com

The head says ‘choose’ but the heart knows there are many paths. In the end the sacred mountain is right here;
sometimes the fog rolls in, sometimes the way forward is clear, sometimes all you can do is stand still and wait
for the mountain to find you.

though the sky is flocked with cloud. The hill is tonsured with trees, newly green. At the dinner table we talk
about the season, and which we need to hide from, how an exuberance of light can drown us as much as the dark.

The small wind is getting bigger, the prayer-flags straining to leave.

Below, in the valley
individual drops lost

still the river is constant

going into the meadow after the retreat

and back
picking twigs, ash, feathers
out of the ‘no inside no outside’ teachings

later, home
the horse’s light breath on my cheek
the way he delicately politely

as if he smells
questions, as if I were an event
blown in on the whirling wind

he barely
recognises me, each thing wholly
new, every encounter the first


Such a small space between

Last night when I couldn’t sleep I got up and looked
at the stars, and that light that accrues
on horizons even at night. Birth and death
seemed such small concepts; and what’s between

squeezed like breath, and so arbitrarily; and we all
think we’re so malnourished in the realm of the heart.
Still, in this morning’s brilliant sun before this salt
dusting of sleet, I watched three white egrets

paddle in the bullocks’ mud like hunched dwarf
angels, and the fibre-optics man climbed down
from his thrumming cab and smiled as he let me through
even though I’d moved the ROAD CLOSED barrier –

perhaps because of the sun, or because I’m
a woman; or maybe because the earth’s still
spinning, and we haven’t yet fallen off.

Roselle Angwin. Published in All the Missing Names of Love, IDP 2012